“For as by one man’s disobedience many were made sinners, so by the obedience of one shall many be made righteous.” (Romans 5:19)

I find that when many Church of Christ’ers talk about salvation or being saved, they do not even use or have the correct definition of save, saved or salvation in mind.

The terms in Hebrew, Greek and English predominantly means to deliver, to rescue from harm or danger, to deliver from sin, to preserve and protect. These actions come from outside of us. They are not something we do. We are merely recipients. Webster’s defines salvation as “the act of saving someone from sin or evil : the state of being saved from sin or evil”, “something that saves someone or something from danger or a difficult situation” and “deliverance from the power and effects of sin”. It was Christ “who gave himself for our sins, that he might deliver us from this present evil world, according to the will of God and our Father” (Galatians 1:4). Before the foundation of the world “… God sent not his Son into the world to condemn the world; but that the world through him might be saved” (John 3:17).

Salvation is simply not about what we do, but rather what God and Jesus Christ has done on our behalf, delivering us from the wages of our sin – death. There is a plan of salvation. And with any plan there is doing involved. But we are not the ones that do the doing. As it has been said before, “Christ has done it all”. I would contend that salvation is simply belief/trust in Christ finished work for our saving/rescue – by his death, burial and resurrection for our sins, according to scripture. Salvation is not about doing or “obeying” “the whole plan of salvation”. It is about believing the plan of salvation. And the focus of that plan is on Jesus Christ and his actions, not ourselves. Biblical Christianity is not a do religion, it is a done religion.

That salvation is not about what we do is also strongly indicated by the biblical use of such terms as redemption (to purchase), reconciliation (restoration to divine favor), propitiation (the act by where which God‘s righteous wrath is satisfied by the atonement of Christ), atonement (restoration to divine favor), deliverance (from sin), ransom (from the wages of sin) and justification (a onetime event in which God justifies sinners by reckoning Christ’s righteousness to their account through a legal declaration). The definitions of these words and their usage in scripture show us that salvation is not something we do (Eph. 2:9, Jonah 2:9). Salvation is done on our behalf.

Scripture also says “And we know that all things work together for good to them that love God, to them who are the called according to his purpose. For whom he did foreknow, he also did predestinate to be conformed to the image of his Son, that he might be the firstborn among many brethren. Moreover whom he did predestinate, them he also called: and whom he called, them he also justified: and whom he justified, them he also glorified” (Romans8:28-30). We cannot make ourselves right before or acceptable to God. It must for done for us by God. We cannot even come to Christ unless the Father draws us and even our faith is a gift and not of ourselves. Another reason we are not saved by what we do is that we are not saved by our righteousness, which is like filthy menstrual rags, but we are saved by being made the righteousness of God – which is a free gift to those who believe in Jesus Christ and His name.

It must also be remembered that God works covenantally and the bible is a covenant document. It was predetermined in an eternal covenant between the Father and the Son before the foundation of the world that Christ would be slain to take away sin for those whom the Father has given Him (Rev_13:8, Hebrews 13:20, John6:37-39, John 17:9-12, John 17:24, John 1:29). And because this contract agreement is between God the Father and God the Son we can rest assured that it will be fulfilled and that Jesus will indeed save and keep secure all those the Father has given him. We can rest in the fact that Christ has done it all for salvation and we are saved when we believe and trust in Him as the payment that the Father and Son made for the penalty of our sin.

PLEASE PRAYERFULLY CONSIDER DONATING TO HELP MY MINISTRY, WITH YOUR HELP I WILL BE ABLE TO SPEND MORE TIME DOING MINISTRY WORK, THANK YOU

As a good soldier of Christ Jesus, you must endure your share of suffering- 2 Timothy 2: 3

PLEASE PRAYERFULLY CONSIDER DONATING TO HELP MY MINISTRY, WITH YOUR HELP I WILL BE ABLE TO SPEND MORE TIME DOING MINISTRY WORK, YOU CAN CONTRIBUTE THROUGH CASH APP HERE, THANKS

But you, beloved, building yourselves up on your most holy faith, praying in the Holy Spirit, keep yourselves in the love of God, looking for the mercy of our Lord Jesus Christ unto eternal life. And on some have compassion, making a distinction; but others save with fear, pulling them out of the fire, hating even the garment defiled by the flesh. Jude 1:20-23

I’M A SOLDIER IN THE ARMY OF JESUS 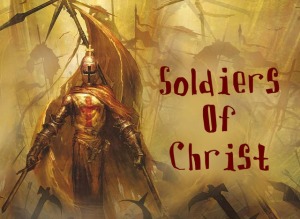 I am a soldier in the army of my God. The Lord Jesus Christ is my commanding officer. The Holy Bible is my code of conduct. Faith, prayer, and God’s Word are my weapons of warfare. I have been taught by the Holy Spirit, trained by experience, tried by adversity, and tested by fire.

I am a volunteer in this army, and I have enlisted for eternity. I will either retire at the rapture or die in this army, but I will not get out, sell out, be talked out, or be pushed out. I am faithful, reliable, capable, and dependable. If my God needs me, I am there. If He needs me in the Sunday school to teach the children or work with the youth, if He needs me to work with the adults, He can use me because I am there.

I am a soldier! I am not a baby. I do not need to be pampered, petted, primed up, pumped up, picked up, or pepped up. I am a soldier!

No one has to call me, remind me, write me, visit me, entice me, or lure me. I am a soldier! I’m not a wimp. I am in place, saluting my King, obeying His orders, praising His name, and building His kingdom. No one has to send me flowers, gifts, food, cards, candy, or give me handouts. I do not need to be cuddled, coddled, cradled, cared for, or be catered to. I am committed. I cannot have my feelings hurt badly enough to turn me around, and I cannot be discouraged enough to cause me to quit.

When Jesus called me into this army, I had nothing. If I end up with nothing, I will still come out ahead. If I win, my God is the reason, and He will continue to supply all of my needs.

I am more than a conqueror. I will always triumph.   I can do all things through Christ. The devil cannot defeat me. People cannot disillusion me. Weather cannot weary me. Sickness cannot stop me. Battles cannot beat me. Money cannot buy me. Governments cannot silence me, and Hell cannot handle me. I am a soldier! Even death cannot destroy me.

When my commander calls me from His battlefield, He will promote me to captain and then allow me to rule with Him. I am a soldier in His army, and I am marching and claiming the victory. I will not give up. I will not turn around. I am a soldier marching Heaven bound. Here I stand! Will you stand with me?-Author Unknown